A Deeper Look into our Mental Narratives 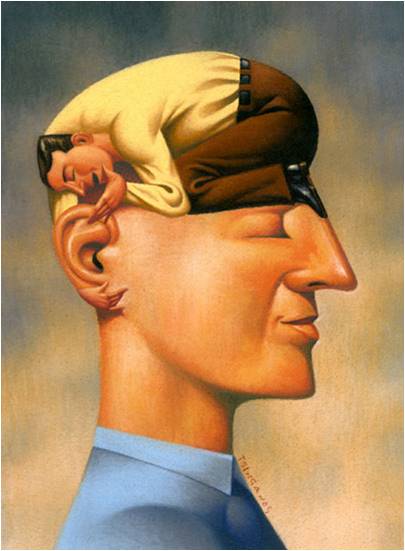 Before we begin, let me ask you an important question – what makes your world?
I know it’s a tough question – or maybe it isn’t?  How much do you believe that it is you that makes your world? This is a crucial question for the conversation we’re about to have.
Unquestionably, the events we encounter every day play a major role in how our experience is formed. But what role does our interpretation of events play in shaping what we see, feel and know?
Do you, like me, believe that thoughts create our world and as such, are the most creative force we humans have?
This is not to say that emotions do not play a significant, even an equal role in forming experience – the fact is that the interplay between thought and feeling is still not fully understood.  As neuroscience progresses, we will hopefully gain a better understanding of the relationship between cognitive thought, emotional response and experience.
In the past few years, there has been a steady stream of research emerging from neuroscience about the workings of the brain.  But little, so far, has emerged about this wonderful thing we call the mind.  To date there is no single scientific consensus on defining the mind.
While the insights of neuroscience hold enormous value and promise in our understanding of human behavioral dynamics it is important to understand that we are not our brains. Our brains, like computers, are tools that our minds use to express deeper experiences that transcend psychology and physiology.

So where’s the narrative talking place?  Where is that voice inside our head that can support and soothe us one moment and tyrannize us the next?  The voice, that can sometimes be, as author, Eckhart Tolle describes, “like living with somebody who can’t stand you, much less anybody else.”
Understanding more about the voice is an important part of this journey.  Of course, there is no scientific answer we know of (yet) but asking questions is an essential part of the inquiry.

And most interesting – who’s observing all of this?

To understand our internal voice/s, it’s valuable to understand that it’s normal to have a multiplicity of voices in our heads.  It’s important to make the distinction between voices that can become delusional and dangerous to a person’s safety or mental stability and may require seeking professional support and a “normal” range of voices that can support or thwart our goals.
Our inner voices are a brilliant adaptation that contributes to our ability to make decisions, plan the future and protect ourselves in the present.  The voices influence our behavior, often unconsciously, which highlights the importance of understanding their influence.

Too often these voices compete in an inner dialogue that becomes an internal struggle for control. For many, the internal chatter becomes incessant, robbing us of our peace of mind.   The inner battle is often done by competing parts of ourselves that can almost seem like independent “sub- personalities” with their own world views, goals and most important – needs.

Italian psychologist, Roberto Assagioli, founded Psychosynthesis, a wing of the transpersonal and humanist movements in psychology. Assagioli, a contemporary of both Freud and Jung, described a letter he once received from Freud that perfectly illustrated the stark contrast between their views, where Freud said, “I am interested only in the basement of the human being.” Assagioli responded, “Psychosynthesis is interested in the whole building. We try to build an elevator which will allow the person access to every level of his personality. After all, a building with only a basement is very limited.  We want to open up the terrace where you can sun-bathe or look at the stars. Our concern is the synthesis of all areas of the personality. That means psychosynthesis is holistic, global and inclusive.  We deny that there are any isolated human problems.”

Not listening to our internal voices and denying or demonizing certain parts is one factor that exacerbates our internal struggle and fragmentation.  These parts have emerged from different roles we’ve played in our lives and from disowned parts we have tried to abandon usually because they were problematic or unacceptable to those around us, especially in childhood. Because of this, some of these parts can seem to be irrational and infantile.  All of these parts, many badly neglected, want something, which is why they persist so tenaciously in our psyches over time and despite newer “adult” experiences.

In her article, Sub-Personalities – Who’s Calling the Shots? author Natasha Dern writes, “Sub-personalities are like children – they need and demand a lot and are often insistent on getting their own way.  There is the rebel and the martyr, the seducer and the saboteur, the judge and the critic and a host of others, each with their own mythology, all co-existing within a person.”

Unity and Diversity – the One in Many

These terms of unity and diversity – the concept of the one in many is borrowed from the work of James Vargui who has written eloquently on the topic of psychosynthesis.   Discussing an aversion many of us have in accepting that the voice inside our heads may be, in fact, many different voices inside our heads, he writes, “It is not surprising that some people have great resistance to seeing their personality as other than one monolithic, coherent unit. Something inside them resists the awareness that their personality is made up of different parts – as if to admit such a breakdown would cause the breaking down into non-being of their identity itself.”  The more we look, the more sub-personalities or parts we can discover – each with their own motives and needs. The more we are able to stand back – without judging or advising or admonishing – and become conscious of how these different parts operate, the more we learn to listen to the “outlaw” voices trying to get our attention.

Just as we would intend to approach any positive interpersonal dialogue – with sincerity, respect and interest, the listener approaches the voices within to hear what may be needed .  Sometimes the listener finds that the voices are rooted in deep-seated fears that need a kind and parental/adult that can reassure and soothe. As the conscious mind (perhaps also just another “part’) allays the fears and hears the concerns of the chorus of voices, especially those who are most unattractive and demanding (who often unhelpfully vie for control) things begin to quiet down.
When we greet these voices within with fear, anger, frustration and resentment, we get more of the same.  Another voice may even be bred in resistance to being ignored and dismissed.  As Buddhist monk Thich Nhat Hahn has said, “If we become angry at our anger, we will have two angers within us at the same time.”

Our ability to look mindfully within to observe, listen and hear the voices within is the key to allowing what is to surface. Listening to our internal voices mindfully is not meant to “silence” the inner chatter, as is often misunderstood.  Every time we listen mindfully, even where there is resistance, we develop a greater capacity for choice. We lessen the possibilities for reactiveness and unconscious repetition.

Speaking about the possibilities of internal reconciliation, Mark Epstein, author of Thoughts Without a Thinker writes, “According to Buddhism, it is our fear at experiencing ourselves directly that creates suffering. This has always seemed in keeping with Freud’s views. As Freud put it, “the patient must find the courage to direct his attention to the phenomenon of his (illness). His illness itself must no longer seem to him contemptible, but must become an enemy worth of his mettle, a piece of his personality, which has solid ground for its existence and out of which things of value for his future life have to be derived.”

Although I’d amend the good Doctor Freud’s language to omit words like illness and enemy, his words, written a hundred years ago, capture the essence of the possibilities of reconciliation within. Even though some voices may simply be habituated nags, at their core, they can represent the disowned or shadow parts of ourselves that we can bring back into the fold.

As author Mark Epstein explains, “We cannot find our enlightened minds while continuing to be estranged from our neurotic ones. As Freud so presciently remarked, “When all is said and done, it is impossible to destroy any in absentia or in effigy. In each realm of experience, teach the Buddhists, we must learn how to see clearly. Only then can the suffering that the Buddha identified as universal be transformed. “