Anxiety & the Quest for Certainty 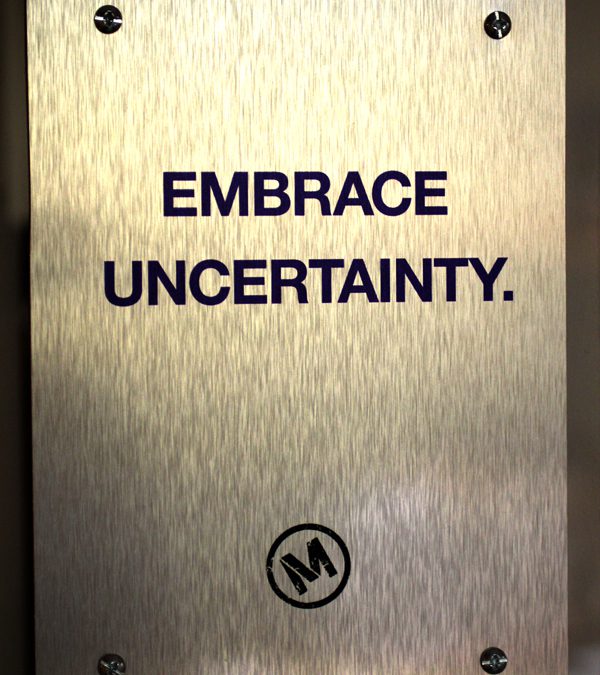 “The quest for certainty blocks the search for meaning. Uncertainty is the very condition that impels us to unfold our powers.”    Erich Fromm

Most of us would agree that whatever we do, we cannot predict the future. Yet, many of us spend an inordinate amount of time trying to control the uncontrollable.  This is a waste of our time and although we resist that idea, we continue to believe that endless rethinking will bring greater clarity. Ultimately, chronic over-thinking creates even more frustration and worry.

Some of us worry endlessly.  Anxiety is always lurking in the background – regardless of the circumstance or issue.  Work, relationships, money, health, family, appearance, the state of the world and the future – always the uncertain future.
Chronic anxiety is common. It manifests itself in illness, interpersonal conflict, road rage, impatience and sleeplessness. Stress costs the nation over 300 billion dollars annually with direct medical costs near 92 billion.  While there are many factors that contribute to this, much of what we call stress is self-produced anxiety.

Despite knowing that we cannot control most situations and circumstances in life, we continue to hold on to the idea that at some level we can.

We can blame the brain for our incessant drive for certainty. Dr. Robert Burton, former Chief of Neurology at the University of California at San Francisco-Mt. Zion Hospital, comments, “I don’t believe that we can avoid certainty bias, but we can mitigate its effect by becoming aware of how our mind assesses itself. We need to recognize that the feelings of certainty and conviction are involuntary mental sensations, not logical conclusions.”

One reason we’re hard-wired to seek certainty (where in the real-world there is none) is due to the brain’s brilliant capacity for prediction. Jeff Hawkins, inventor of the Palm Pilot and founder of a neuroscience institute writes, “Your brain receives patterns from the outside world, stores them as memories, and makes predictions by combining what it has seen before and what is happening now. Prediction is the primary function of the neo-cortex and the foundation of intelligence.” With about forty environmental cues that the brain can consciously track at any given moment (and subconscious cues numbering around 2 million) the brain elegantly selects the amount of data it will use by recognizing patterns. The brain likes patterns.

Author David Rock states, “Like an addiction to anything, when the craving for certainty is met, there is a sensation of reward. The ability to predict and then obtain data that meets those predictions generates an overall towards response. Its part of the reason games like solitaire, Sudoku and crosswords puzzles are enjoyable. They give you a little rush from creating more certainty in the world in a safe way.”
So we can guess that the emotions associated with the perception of certainty – satisfaction, contentment, calmness, confidence, relief, comfort, stability and safety – are experienced as rewards to our pattern seeking brains.

If The Brain Loves Certainty – It Really Doesn’t Like Uncertainty

Because everything we do in life is based on our brain’s drive to minimize danger and maximize reward, our emotional (or limbic system – home of the amygdala (the flight or fight response) is constantly trolling our environment for cues.  David Rock refers to these reactions as either towards or away responses. Towards responses move us in the direction of reward – away responses are attempts to thwart threat.

In our quest for certainty, we unconsciously and consciously trigger the limbic system by the way we think about the events in our lives.  Think of your limbic system as a hyper-vigilant sentry – guarding a  command post searching for incoming marauders.  This system is easily aroused and difficult to undo.  Once activated the limbic system is placed on even higher alert. A cascade of unwanted thoughts and hard to manage feelings start flooding our physiology and disengaging becomes even harder.

Our insatiable appetite for certainty is another reason we cling to beliefs that are outdated or simply are not true. For most of us, our greatest “blind spots” are our unexamined and unchallenged beliefs.  To reduce the ambiguity of uncertainty, we construct beliefs that create the illusion of assurance.  These entrenched beliefs are enabled by self-deception.  They come at a cost.  Some people argue that self-deception is necessary for self-preservation, and that makes sense. While self-deception may be a short-term fix, it forces us into further self-delusion by creating a world seen only through the perceptual filters of our own deception.

“The psychological condition of fear is divorced from any concrete and true immediate danger. It comes in many forms: unease, worry, anxiety, nervousness, tension, dread, phobia, etc. This kind of psychological fear is always of something that might happen, not of something that is happening now. You are in the here and now, while your mind is in the future. This creates an anxiety  Eckhart Tolle

The only place we can ever be is here. As author Eckhart Tolle says, most of us are here – but our minds are in the future.  One of the triggers and casualties of the quest for certainty is that we spend more time in our heads in the past – rehashing what went wrong – and in the future – trying to plan perfection – than we do in the here and now.

To resist “what is” takes energy. What we are actually resisting are the feelings associated with certain thoughts.  Author Raphael Cushnir explains, “The truth about emotions is pretty straightforward. They’re messages from the brain that are delivered in the body. To receive these messages we need to feel them where they arise. If we’re lonely, for example, the message might show up as a stab in the heart, a tug in the stomach, a welling behind the eyes.  Counterintuitive as it may seem, to feel a painful emotion fully, at the site of its delivery, is the best way to help it diminish. Not feeling the emotion causes it to grow stronger, remain stronger and mess up our lives in many ways.”  Research in neuroscience shows that emotion suppression, reduces cognitive resources and suppresses memory in the process.  It is only with acceptance of “what is” in the here and now that we can fully integrate the messages of our brain and body.  This doesn’t mean that we settle for mediocrity or what we don’t want, but instead we tell ourselves the bare truth in the moment of our experience.

The truth is we can’t predict the future – whether it be a minute, a decade or a lifetime. The truth is we can’t control what others think or how they behave. The truth is we are both fragile and vulnerable and powerful and resourceful at the same time.  That is the miracle of being human.  We humans crave peace because it feels like certainty. But the “truth” is closer to Eckhart Tolle’s wise words, “Don’t look for peace. Don’t look for any other state than the one you are in now; otherwise, you will set up inner conflict and unconscious resistance. Forgive yourself for not being at peace. The moment you accept your non-peace, your non-peace becomes transmuted into peace. Anything you accept fully will get you then, will take you into peace. This is the miracle of surrender. When you accept, what is, every moment is the best moment.”