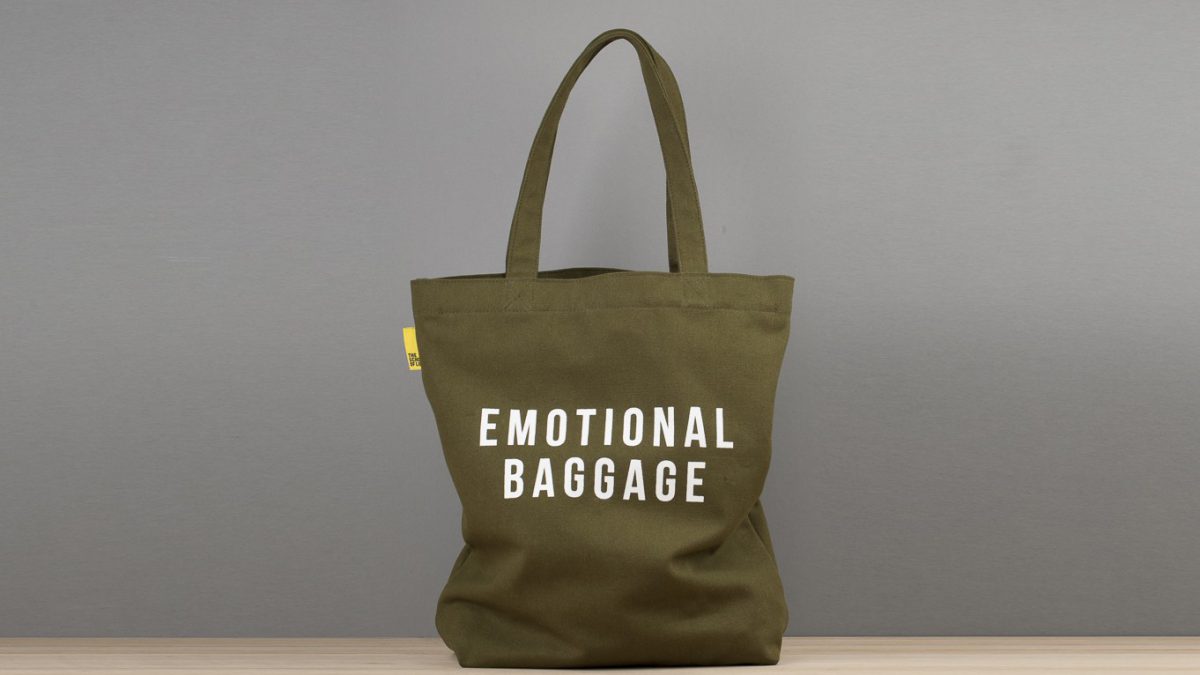 Ever wonder what’s in that bag?

By now the term emotional baggage is familiar – but what do we think is in the bag?

Surely it’s packed with old hurts, resentments and fears, but unless we go in there and pay some attention to those unwanted feelings – the bag stays full.

If we’re not the type that likes or looks at feelings, the bag becomes heavier and harder to carry. Some of us still believe that there’s no place for feelings in the workplace. Some of us believe that feelings are soft and prize the intellect over our emotions.  Some believe that if they unpack the bag, even slightly, they’ll unleash Pandora’s Box.

The bag is not only filled with stuck feelings but also the beliefs that keep emotions in place. Unless we get a clear picture of the forces in our lives that generate and feed feelings, the bag stays packed.  Dr. Miriam Greenspan, author of Healing through the Dark Emotions, tells us, “As much as emotions are in –the- body experiences, they are mediated by socially conditioned beliefs. We just don’t feel, we make sense of what we feel. And our thoughts both trigger and subdue our emotions.”

These mediating thoughts are reinforced by beliefs. For most of us, even a slightly contrary challenge will set up a defense for our beliefs.   If you pay close attention, you can hear the justification for the defense in your self-talk. “I know some of my co-workers get frustrated with my impatience, but it’s just not in my nature to change.” The internal dialogue that all of us have – but don’t pay attention to – is filled with acquittals for our beliefs.

Much of the process Greenspan so aptly describes happens unconsciously and only a conscious commitment to self-awareness of mind and body can bring them to the surface to be healed.

Beliefs are the Glue that Keep the Bag Full

Beliefs, the thoughts we operate on as truths, are accumulated, reinforced and modified throughout life, but rarely are they consciously uprooted, examined and discarded. They come in all forms – small behaviors that become hardened in habits to the bigger life-shaping events – “My first love is art but I know I will never be able to make a living doing it so I’m getting a degree in finance.”

Early conditioning lays the foundation for most of what we believe. Your parents and caregivers told you about the world and how it worked. “Life is hard.” They told you stories about the people in it and explained why they did the things they did.  They explicitly or implicitly told you who and what to trust and why. “Trust is to be won, not given.”  They gave you a blueprint of what was possible in the world and what wasn’t.  “As much as you’d like to be more honest, you can’t leave yourself open to being taken advantage of.”
As they explained and modeled their world – yours was forming.  Next we add in the values and messages of the cultures that shaped your thinking.  The generation you were born in will help you to understand many of your beliefs. On your way to adulthood, relentless peer pressure cements your beliefs and for some grown-ups, never lets up. “Come on, we’re all having another drink, don’t wimp out.”

And while you were downloading these ideas, your individual human needs were either being met or unmet.  Until you were old enough to use your intellect to define and declare your needs, you had one form of expression to mitigate experience – your emotions. The anger, pain, hurt, fears and joys all carried a story – and those stories were anchored in beliefs, assumptions and expectations. “My father was a loner and rarely showed affection towards anyone – even my mother – so I really didn’t expect it.”

Some stories reflected inherited collective beliefs and unconsciously carried until awareness or crisis illuminated the source and burdens of their weight. Given our past histories, with stories of triumph and pain, beliefs can be the lines of emotional transmission between generations.

The Emotions in the Bag

Few of us like to admit we are dragging old emotional baggage around.  If you get emotionally triggered (c’mon we all do) you’ve got baggage. Now if you’re OK behaving reactively rather than mindfully, keep the bag packed.

Let’s face it, most cultures are still emotionally repressive – or at least confusing when it comes to messages about when and how it’s safe to show feelings.  This is especially true for men.
In his article, Why Men Withdraw Emotionally, author Keith Artisan writes, “Men have been discouraged from feeling emotional. We have been mocked, attacked, and belittled when showing emotions. Big boys don’t cry, toughen up, and bite the bullet are all phrases men grow up with. So when we are faced with emotional situations, we are total novices. The biggest harm that is not recognized or appreciated for the depth of damage that it causes at the emotional level to a man is that men are expected to be tough, to protect, and kill to defend their family. Violence, and the expectation of violence, mandates an absence of emotional sensitivity.”

If we accept Artisan’s premise, or some version of it, we’d have to unpack dozens of beliefs that have kept the emotional repression/suppression of men in places for ages. In 125 studies in various cultures, boys and men were consistently less accurate at interpreting unspoken messages in gestures, facial expressions and tone of voice. Men also react less intensely to emotions — and forget them faster. In an experiment at Stanford University, photographs of upsetting or traumatic images triggered greater activity in more regions of female brains. Three weeks later the women remembered more detail about the pictures than the men. In similar ways, the researchers speculated, a woman may continue stewing over a tiff or slight her husband has long forgotten.
If we want to unpack the bag we have to get a better understanding of how our emotions work.

There are many findings from science we can use to do that. UCLA researcher Dr. Matthew Lieberman found that learning to “label” our emotions maximizes cognitive ability.  He asserts that using simple language to “name” anticipated and experienced emotions, actually lowers the arousal of the limbic system producing a quieter brain state. This, in turn, allows the Prefrontal Cortex ( the so-called “rational brain”) to function more effectively.According to Dr.Lieberman,”When you attach the word ‘angry,’ you see a decreased response in the amygdala, when you attach the name ‘Harry,’ you don’t see the same reduction in the amygdala response. In the same way you hit the brake when you’re driving when you see a yellow light, when you put feelings into words; you seem to be hitting the brakes on your emotional responses. As a result, an individual may feel less angry or less sad.”

Your Emotions are Your Energy

Emotions are all about energy. Think about how your body feels when you are scared, sad or happy. While it is clear that emotions are visceral, many of us really don’t get this. When asked what they are feeling, many people don’t know. Asked to find their feelings in their bodies, many people seem confused and puzzled and give a cognitive response, “My boss has been giving me all the worst assignments lately without any explanation.”

We can’t unpack the bag without an integrated mind-body understanding. The root of the word emotion comes from the Latin movere – to move.  Emotions are intended for us to take action – in some form – to move their energies out and forward.

Think of the unpacked bag as filled with emotional traumas of all sizes. Some may be a feeling of hurt for being unrecognized at school or work or the deeper baggage of verbal or physical abuse. World renowned trauma expert, Peter Levine, helps us to understand, “Animals in the wild instinctively discharge all their compressed energy and seldom develop adverse symptoms. We humans are not as adept in this arena. When we are unable to liberate these powerful forces, we become victims of traumas. “
While we can’t just shake off the residues of fear and anger like the wounded impala or wildebeest, we can learn to use our cognitive skills to work with our emotional information/wisdom and learn to listen to the messages of our bodies.

But first, we have to acknowledge their power.

Louise Altman, Partner, Intentional Communication Consultants
Join us here if you’d like to receive our occasional general mailings!
Photo: The School of Life