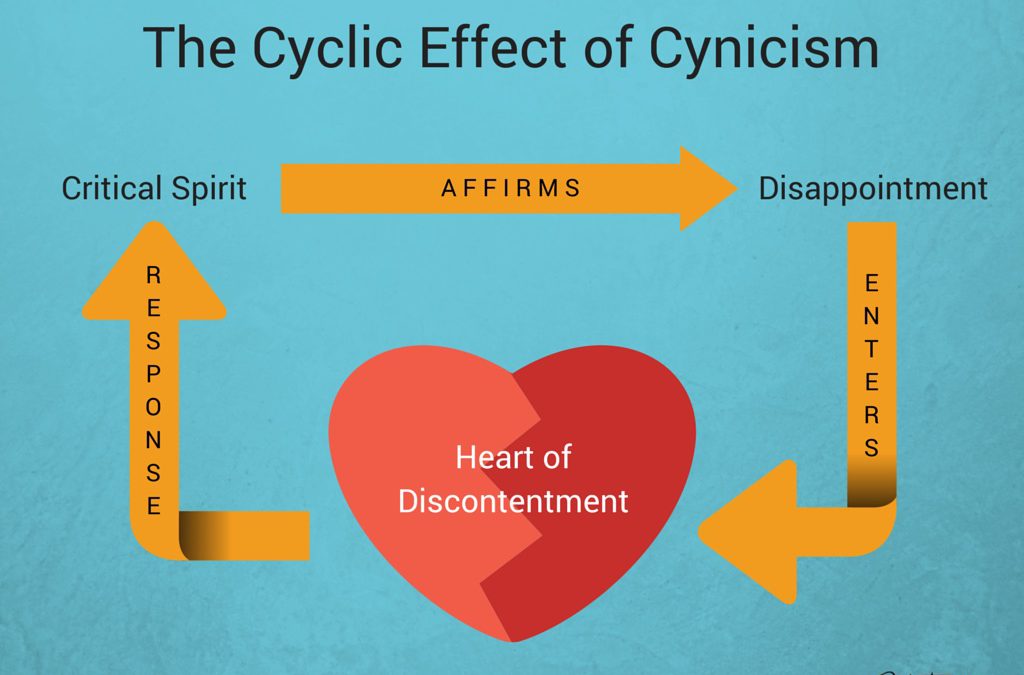 “Cynicism is an unproductive reaction to disappointment. It springs from the helplessness people feel when they are disappointed by others and allow themselves to become detached observers rather than active participants. It carries with it a sense of entitlement that says, “You have disappointed me therefore  my cynicism is justified.”        Jamie & Maren Showkeir

Have you become a cynic?  If so, you’ve got plenty of company. Some might call this the era of cynicism. Some might even say, that’s just smart given the world today.

Hard core or soft – cynicism can be sapping you of your vitality, spontaneity and possibilities. The signs of cynicism are obvious –low or no trust,  blame, criticism, divisiveness, either-or thinking, pessimism, negativity, sarcasm. At work, in relationships and in relating to the world – cynicism has become a dominant response to life’s events.  It seems that lots of people are cynical about everything today – the economy, leaders, colleagues, media, government, corporations – you name it!  To be sure, there is good reason to question the conduct and motives of many of our institutions.  As citizens, employees and parents we should be demanding greater responsibility, accountability and transparency (of ourselves as well).

But often cynicism breeds apathy – not activism.   We inoculate ourselves with ever-increasing doses of cynicism as a defense against life’s disappointments and often wear our cynicism like a badge of honor. While it’s easy to understand why cynicism is rampant – and even celebrated as “realism” by many in the cynic’s fan club, cynicism costs us all dearly.

Dictionary.com defines a cynic as a “person who believes that only selfishness motivates human actions and who disbelieves in or minimizes selfless acts or disinterested points of view.”   Other definitions include words like bitter, contemptuous and pessimistic.

Cynicism is not an emotion.  It is an internal state that’s made up of our thoughts, feelings and behaviors. It colors our perception of what we see – what we feel and how we act in the world.  While cynicism itself in not an emotion, it can trigger and reinforce  many life-sucking emotions –  hostility, anger, frustration, impatience, bitterness, resentment, hatred, rage, annoyance, doubt, anxiety and fear are all emotions associated with cynicism.

Cynicism is a psychological self-protection against – hurt, disappointment, sadness and most important – fear.  Cynicism is often fueled by anger – whether it’s the big noisy kind or the seething slow-burn types of anger. It can also be a distraction.  A cynical response is sometimes easier to handle than taking action to make changes in our lives and in the world.
While cynicism is sometimes justified, unless the strong feelings it evokes drive us to constructive action, it can corrode our spirit and sap our energies. The unchecked feelings that fuel cynicism can also take a big negative toll on our relationships, mental & physical well-being, families, organizations, institutions and our culture in general.
“Cynicism distracts the brain from solution-building and rewires it to problem-blaming instead. It can also increase hormones that produce dangerous levels of stress. It rewires the brain for damaging practices such as distrust, doubt and scorn. The parts of the brain that are engaged in cynicism differ from those involved in more positive behaviors such as compassion for others or building meaningful solutions to problems. Eventually the brain moves cynical behavior from its working memory over into the basal ganglia where your mind stores habitual behaviors. At that point… choices for positive behaviors are harder to make”   Dr. Ellen Weber

The lenses of cynicism can become a habituated reaction to the world around us. When we are cynical – we are mostly out of conscious awareness – reacting on auto-pilot to events and behaviors we have determined (often without examining) as suspicious and untrustworthy.  Because the state of cynicism is fraught with unproductive feelings, it clouds our critical thinking process and saps our ability to make rational choices.

Beliefs are at the Heart of Cynicism

How we define cynicism tells us a great deal about our thinking process – and our beliefs.  Beliefs are at the core of cynical reactions.  You’ll often hear cynic’s rationale expressed with statements like these:

All of these statements carry some truths.  They also carry old hurts and wounds and lot of doubt and fear about the world. When we live based solely on the experiences of the past, we poison the well of creativity, spontaneity and possibility.

Is this the place you want to be?  Is this line of thinking and feeling ultimately serving you and your goals? And what are the implications for workplaces, schools and institutions scarred by cynicism and plagued by mistrust? What kind of future are we building with cynicism?  There are so many reasons not to trust.  There is ample evidence for disappointments at many levels.  It is easy to see the negatives.

But it is much harder to dig deeper and affirm what is working in our lives, our organizations, our families and friendships and our society.  This is the key to staying vibrant, hopeful and in the “game.”  Most important, it’s vital to stay present!   One of cynicism’s worst aspects is that it claims our presence. While we may not be able to solve all the problems we see, we can stay aware and engaged.  We can choose where to apply our energies because we haven’t squandered them on cynical impulses. It’s not about sticking our heads in the sand. It is about taking responsibility and making choices internally – and externally.

It takes discipline and constant activation of our deeper wisdom to not bail out emotionally.  When we succumb to our cynical self, we disregard all the good within and around us and align ourselves with the worst behaviors and actions of others.  In doing so, we separate ourselves from the world and take refuge in the temporary illusory protection that cynicism shields.

Thanks for reading,
Louise Altman, Intentional Communication Consultants
Join us here if you’d like to receive our occasional general mailings!