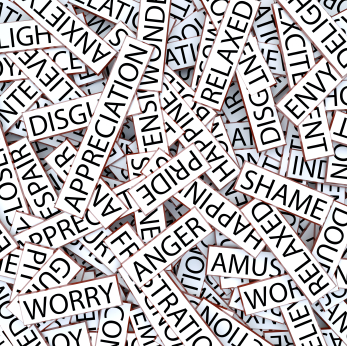 “The publication of Daniel Goleman’s Emotional Intelligence in 1995, marked a turning point in popular culture. Finally, emotions were deemed critical to human intelligence. Ironically, the book presents a model of emotional intelligence that is founded in the subordination of emotions to reason.”
Miriam Greenspan, Healing Through the Dark Emotions
Wine Connoisseurs know that there is a vast array of wines to be had when given a choice. Telling the restaurant server you would like “white” doesn’t give them much information.   But unless we know and value the difference in wines, we get used to the habit of just requesting the generic brand.
There are over 2000 words in the English language alone that refer to feelings. While that may seem excessive, a bit of education about the world of emotions quickly reveals that each feeling we have has a unique, sometimes, nuanced character. While there are universal experiential similarities in the primary emotions, each one of us has an individual biological signature that lets us know what we are feeling. If we pay attention to that information – we’ll soon realize that our emotions, felt, over time, have a remarkable physiological similarity.
But naming emotions is not simply a cognitive act. I can give you a list of feelings that while interesting, does not guarantee that you can identify those emotional states in your body. This is a critical part of the emotional literacy learning experience. Until you connect the name of the emotion with the bodily sensations that express it, you won’t know if you are feeling worried or just concerned. There’s an important difference.
Getting out of our heads and into our bodies is the key. Scientists refer to this as “embodied cognition,” a very nifty term for the important fact that receiving, exchanging and communicating information with our environment is simply not a mind-brain event.

The Old Emotion vs. Reason Split

According to Jeffrey Schwartz, a research psychiatrist at the University of California at Los Angeles (UCLA), “Cognition is embodied when it is deeply dependent upon features of the physical body. Dominant views in the philosophy of mind and cognitive science have considered the body as peripheral to understanding the nature of mind and cognition. Proponents of embodied cognitive science view this as a serious mistake.” This new understanding of the brain-body communication changes our definition of cognitive processing. It elevates the body as a source of information about our experience as valuable as that of the mind.
In writing about the age-old reason vs. emotion split, author Miriam Greenspan discusses the work of Emotional Intelligence author Daniel Goleman, “Despite its considerable contribution to valuing and understanding emotions, (Goleman’s) work is limited by a masculine bias against the emotional brain itself. Emotional control is the main goal.”
Greenspan compares Goleman’s perspective with that of pioneering neuroscientist Candace Pert, author of Molecules of Emotions: Why You Feel the Way You Feel. In Pert’s model, emotional intelligence is suffused throughout the body, with every part – the endocrinal, gastrointestinal and immune systems all playing important roles.
Highlighting Pert’s work, Greenspan states, “ Emotional intelligence hinges not on one part of the brain dominating another, but on a smoothly flowing system of emotional “infoenergy” throughout the body/mind. Emotions don’t need to be ruled; they need to be tolerated and expressed. They have an intelligence unto themselves; not when they are dominated, but when they are free-flowing.”

There’s some relatively new news in neuroscience that is one of the game-changers in increasing our emotional competency. In 2007, UCLA research, Dr. Matthew Lieberman, found that learning to “label” our emotions  maximizes cognitive ability.  He asserts that using simple language to “name” anticipated and experienced emotions, actually lowers the arousal of the limbic system producing a quieter brain state.
This, in turn, allows the Prefrontal Cortex (PFC – the “so-called rational brain) to function more effectively.   According to Dr.Lieberman, ”When you attach the word ‘angry,’ you see a decreased response in the amygdala, when you attach the name ‘Harry,’ you don’t see the same reduction in the amygdala response. In the same way you hit the brake when you’re driving when you see a yellow light, when you put feelings into words; you seem to be hitting the brakes on your emotional responses. As a result, an individual may feel less angry or less sad.”
The implications of these findings are impressive and important for our day-to-day emotional and cognitive functioning. While we are busy pushing down our true feelings (in some cases we call this being “professional” “adult” or “mature” ) we’re not only denying our real experience but we are taxing our cognitive functions and wasting precious brain fuel in the process.
Another important outcome of increasing our ability to identify, allow and listen to our feelings is potentially decreasing the physical aggression which so often results from emotional triggering. When we “use our words” to mitigate our triggered emotions, we begin to switch off the fight or flight hormonal releases that spike physiological aggression. This aggression can be outer and/or inner directed depending on our degree of emotional overwhelm.

There are two goals to accomplish when we get emotionally triggered. The first, typically with associated feelings of fear and anger, is to regain our composure and state of equilibrium as quickly as possible.
But the second goal, not reserved just for the challenging fight or flight group of emotions, should be to develop a greater ability to extract the message from the feeling. If you accept the idea that emotions are as Miriam Greenspan describes, “infoenergy,” then you recognize the potential value from each little emotional gem. Think of these emotional messages as barometers that gauge the state of your needs.
In her excellent blog, Brains on Purpose, author Stephanie West Allen suggests ways to practice mindfully identifying feelings and becoming more familiar with the language of our bodies. “Sometimes we become distracted from the direction in which we want to be going.  Our purpose may become clouded by anger, annoyance, confusion, jealousy, fear, or other feelings that knock us off-balance and take us off the path.  Brain research has provided a handy way to deal with the distraction. We label the feeling, saying in our mind or, if appropriate, aloud, statements such as “I am angry” or “I am nervous.”  When we make statements like this, that part of the brain feeling the distracting emotion is calmed.  We can then return to clarity and purpose.  The neuroscience literature calls this “labeling the affect.”
One prescriptive note to this excellent suggestion is to change the language you use from “I am angry” and “I am nervous” to “I feel angry” and “I feel nervous.”  I believe that the language softens the totality of the experience. We “are” many things, and anger and nervousness or any other feeling passing through does not define our total experience.
As Stephanie points out  it is often difficult – in the heat of the moment – to stop and remember to label what we are feeling. That’s why when we learn to practice this mental notation  when we are not in emotionally triggering situations, we learn to build a capacity that cumulatively rewires the brain.  Most of us need practice, practice, practice. Eventually, this can result in a shift in how we react when our emotional buttons get pushed – regardless of the source.
While it takes consistent effort – the payoff for becoming more emotionally literate can be enormous. We can experience, after all, a sense of greater freedom and liberation from tyrannical emotional states.
Wisely, author Miriam Greenspan assures us, “Befriending emotional energy is about focusing our attention on these sensations and reactions nonjudgementally, allowing the body to feel what it feels, and the mind to think what it thinks, while maintaining a witness consciousness – a mindful awareness of the stream of sensations and thoughts as they pass through our bodymind.”
Science is helping us to learn that the surest way to release and move through our emotions is to embrace them. The more we know them, the more we understand their message. The more we invest in our emotional literacy – the more energy we free up. Keeping the lid on what we feel is an idea whose time has passed.