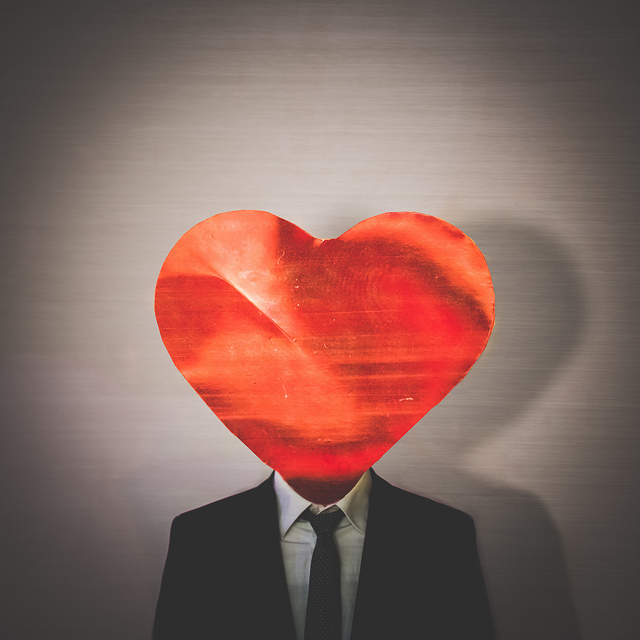 Since this piece was first published in 2012, it’s been in the top 5 of viewed articles every day. Clearly – the head vs. heart conflict is very much alive.
There is little disagreement that effective decision-making is one of the most important tasks we have in every part of life.
If we were to take a survey in the average workplace to poll what people believed was most needed for effective decision-making, which of these do you think would top the list?
Factual information?
Risk assessment?
Clear thinking?
Limited emotional interference?
If you chose the last item, I’d like you to reconsider.
In his book, Descartes’ Error: Emotion, Reason and the Human Brain  (first published in 1994)  one of the world’s top neuroscientists, Antonio Damasio, profiled his patient, Elliott, one of his most well-known cases.  Formerly a successful businessman, model father and husband, Elliott suffered from ventromedial frontal lobe damage as a result of a tumor and subsequent surgery for removal.
Following his operation, Elliot dispassionately reported to Damasio that his life was falling apart.  While still in the 97th percentile for IQ, Elliot lacked all motivation. His marriage collapsed as did each new business he started.  Damasio found Elliott an “uninvolved spectator” in his own life, “He was always controlled. Nowhere was there a sense of his own suffering, even though he was the protagonist. I never saw a tinge of emotion in my many hours of conversation with him: no sadness, no impatience, no frustration.”
It was clear to Damasio that as a result of his surgery, Elliot was incapable of making decisions, “Elliott emerged as a man with a normal intellect who was unable to decide properly, especially when the decision involved personal or social matters.” Even small decisions were fraught with endless deliberation: making an appointment took 30 minutes, choosing where to eat lunch took all afternoon, even deciding which color pen to use to fill out office forms was a chore.  Turns out Elliott’s lack of emotion paralyzed his decision-making.
In the preface to the 2005 edition of Descartes Error, Damasio wrote, “Today this idea [that emotion assists the reasoning process] does not cause any raised eyebrows. However, while this idea may not raise any eyebrows today among neuroscientists, I believe it’s still a surprise to the general public.  We’re trained to regard emotions as irrational impulses that are likely to lead us astray.  When we describe someone as “emotional,” it’s usually a criticism that suggests that they lack good judgment.  And the most logical and intelligent figures in popular culture are those who exert the greatest control over their emotions–or who seem to feel no emotions at all.”
Although neuroscience has built a strong body of evidence over twenty-five years to show the inextricable link between reason, emotion and decision-making, most of mainstream culture still doesn’t get it.
When it comes to business (as well as many other professions – medicine, law, sciences) many people still warn that emotions have no place in decision-making. Many professionals still expect employees to leave their personal feelings at home.   Women, especially, are viewed as overly emotional in the workplace and many still feel the need to compensate by subduing the expression of their feelings.
Mainstream thinking about reason over emotion is generally based on two assumptions: the first is that we have a choice whether to feel or not, and second, that emotional “suppression” works. While there are many ways we try to avoid emotions, the most common is still believing that “thought-stopping” works as a  “regulation” strategy.
Dr. Daniel Wegner found that there can be significant consequences when you try to push away thoughts and feelings.  Wegner called this the “rebound” effect. Simply put, these strategies often backfire and result in an increase of the intensity of the thoughts and emotions that are being suppressed.
According to PsyBlog author Jeremy Dean, “The trouble comes when I consciously stop trying to distract myself and the unconscious process carries on looking out for the thing I was trying to suppress. Anything it sees that looks vaguely like the target triggers the thought again and round I go in another loop of thinking the same thought I was desperately trying to forget about.”
This is, after all, the brain doing its brilliant work at pattern detection, firing and rewiring neurons in the process. Some researchers believe emotional suppression may, in part, be a reason that people with psychological conditions such as post traumatic stress disorder (PTSD) and obsessive compulsive disorder (OCD) struggle with so many painful thoughts and feelings.

The Brain Makes Decisions Based on Feeling

Motivation is driven by feeling, not intellect.
Our prevailing misconceptions about how the brain works keep us mired in obsolete ideas about the decision-making process.  Many of us try to rule out the emotional side of decision-making only to find we become stuck in so-called analysis-paralysis. We often avoid making decisions or make them hastily because we want to ‘skip the feeling part,’ which is not only unavoidable, it’s short-sighted.
There continues to be a protracted controversy between pundits over reason and intuition, which is another version of the ancient reason over emotion battle.  Science and philosophy writer, Sam McNerney describes Plato’s Phaedrus, where the mind is likened to a charioteer that commands two horses, one that is irrational and crazed while the other is noble and of good stock. The job of the charioteer is to control the horses to proceed toward Enlightenment and the truth.
Emo­tion is that part of the brain sys­tem that tells us how impor­tant some­thing is. Atten­tion focuses us on the impor­tant and away from the unim­por­tant things. Cog­ni­tion tells us what to do about it.  These functions of the brain are integrated.  Decisions are constantly being made in a highly flexible system that is constantly drawing on new information and experience  – emotional and cognitive.

Why Balance is the Answer

A lot of precious neural energy is wasted on the either or debate of emotion vs. reason in decision-making.
In fact, it’s over-thinking that tends to overwhelm our rational pre-frontal cortex.  What is known as the “7 plus or minus 2” rule is based on the research that short-term memory capacity varies from being able to hold between 4 and 9 bits of information at one time.  When faced with too many variables, the brain simply makes the wrong decision because its resources are overburdened.
In fact, over-thinking a problem or decision can add to our body’s allostatic load resulting in a chronic response to stress.  As stress management is largely thinking management, the prudent use of our thinking process to measure or understand any problem is essential to prevent overloading the system.  This is particularly important in an era when external distractions are at epic levels, challenging the brain’s energy reservoir to stay alert and focused amidst a constant onslaught of information.
We can take steps to approach the decision-making process in a more balanced way. The time to do this isn’t just before an important and challenging decision needs to be made but as a practice to achieving greater equilibrium between what we think and how we feel and act in the normal course of our lives.
Step 1
Observe the patterns of your thinking process over time. This means doing some on-going thinking about how you think. It means bringing more of your thought process into your conscious awareness. Notice the content of your thoughts. What kind of language do you use to talk to yourself? Is it kind, harsh? Does that vary? If so, when?  What’s your decision-making style? Do you tend to over-analyze, generalize or cut, perhaps prematurely to the chase of a problem? Understanding what you think and how you think under different circumstances is critical to this process.
Step 2
Identify the beliefs you hold that could influence your decision-making process.  Beliefs are at the core of everything we do and don’t do. They are our “rules.” One reason we resist decision-making is because to decide often requires us to change our rules.  That usually takes us outside of our comfort zone (and our comfort zone is most definitely the realm of our feelings).  First step in uncovering beliefs that may limit your decisiveness is to understand what you believe about rationality vs. emotionality.
Step 3
Increase your emotional self-awareness.  If you don’t want to be ruled by feeling, you must allow your emotions to experience the light of day and give them some breathing room.  If you are ignoring, de-valuing or burying emotions, you’re not only squandering precious energetic resources, you are draining your cortical batteries trying to rationalize what is a bodily, not a mental experience.  According to Damasio, no single center of the brain dominates decision-making.  He believes that ”the lower levels in the neural edifice of reason are the same ones that regulate the processing of emotions. In turn, these lower levels maintain direct and mutual relationships with virtually every bodily organ thus placing the body directly within the chain of operations that generate the highest reaches of reasoning and decision-making.”
Step 4
Place reasonable limits on the amount of information you need to make a decision. Depending on the scope and importance of the decision this will vary.  There are ample studies that show that too much information impedes decision-making.  Make sure the information you consider takes into account your intuitive sense of the right direction to take.  Studies show that long before your reasoning mind kicks in, your emotional brain senses the way to go.  Your feeling brain is listening through your body, so the information that you receive is sometimes subtle and somatically based.
To optimize your decision-making process, you have to build capacity in both your brains – the rational and the emotional. They’re brilliantly interwoven to maximize understanding the world around you and the vast world within you.
Food for thought, isn’t it?