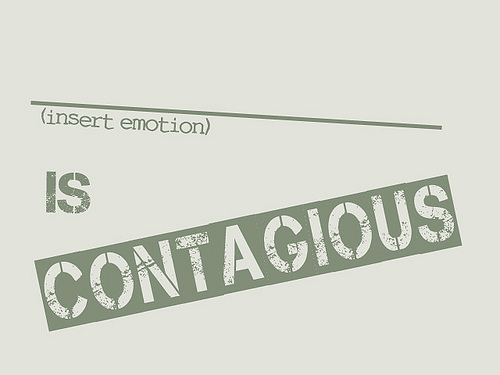 “Employees are not emotional islands. Rather, they continuously spread their own moods and receive and are influenced by others’ moods. When they work in groups, they literally can catch each others’ emotions like viruses, a phenomenon known as emotional contagion.” Wharton @ Work, University of Pennsylvania

In the past decade, there has been an important finding in neuroscience that should impact on how every leader leads – emotions are contagious.

One aspect of the research has been to examine the emotional impact of “bosses” on those who work for them – the power of mood to spread and “infect” others. “It is one of the most robust phenomena I have ever seen,” said researcher, Richard Saavedra, and it’s all unconscious.”  Saavedra and his colleagues at Cal State University at Long Beach examined the effects of leader’s moods on groups.  189 volunteer undergraduates were selected and divided into 63 groups of three and told they were participating in a team building exercise. Before the exercise, a “leader” chosen from each team was shown one of two video clips — “Saturday Night Live” skits or a vignette on torture — designed to induce a positive or negative mood. All team members’ moods were measured before and after the task.

The results were definitive.  Leader’s moods permeated the groups – and “negative” moods trumped the positive.  According to [email protected], “Because employees pay great attention to their leaders’ emotions, leaders can strongly influence the mood, and thus attitudes and performance, of their teams through emotional contagion.”

Professor Barsade’s research began from a direct experience with a co-worker.  Journalist Marina Krakovsky writes: “Years ago, shortly before Professor Barsade went to graduate school, she worked in a group that included a curmudgeonly, crabby coworker. Since Barsade wasn’t working closely with “Crabby,” she assumed this woman had no effect on her life. That is, until Crabby went on vacation. The group became a much more sociable and pleasant place to be,” recalls Barsade. Then, when she returned the next week, everybody got uptight again. “I remember how striking it was. It wasn’t that she was telling us what to do, but just the way she was in the workplace that was influencing others.”
Barsade says that the experience led directly to her research into “emotional contagion,” the transfer of moods among people in a group. Emotional contagion and other emotional effects interested Barsade because they helped explain phenomena that, on the surface, may not seem rational.

Ms. Krakovsky also points out, “Emotion and reason have classically been seen as opposing forces, and the insight that changing your thoughts can change your feelings forms the basis of a popular form of psychotherapy. But the true relationship between thoughts and feelings is far more complex. Not only can thoughts lead to feelings (good or bad), but feelings also lead to thoughts and actions, which can feed off each other.” According to Professor Barsade, “Emotions and reason are completely intertwined.”

While it is easy to get caught in the grip of emotional contagion (example: road rage) ultimately we can exercise choice over our emotional responses.  “In general, the key is awareness,” says Cal State researcher Saavedra, for this reason, making people aware of the phenomena of emotional contagion is crucial.”   It is important to understand that when we expose ourselves to the mood of leaders and co-workers who are unconsciously acting out feelings like anger, hostility and fear it can have toxic effects on our well-being – and our performance.

Emotional contagion can work both ways.  Fear can spread – as well as enthusiasm or confidence or hope.  This is why it’s critical for leaders to understand they can use the hard-wired power of mood contagion in creating a positive emotional climate for those around them.   These conscious (authentic) efforts to infuse workplace relationships with positive feelings can impact every aspect of performance. When leaders learn to consciously manage their own emotions and understand the emotional triggers of others, they can become a potent force for good within the workplace.  As long as management and leaders still cling to worn-out beliefs  like “there is no place for emotions in the workplace” we’ll still be subject to harsh and toxic cultures that are inherently anti-productive.

Enlightened leaders will increasingly harness the knowledge of emerging brain science to understand the whole-brain perspective of human dynamics.   And as they do, it will transform work as we know it.

Thanks for reading!
Louise Altman, Intentional Communication Consultantants
Join us here if you’d like to receive our occasional general mailings!