Lie to Me ~ revisited 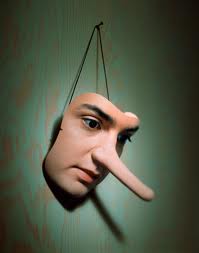 Some years ago, I wrote a post inspired by– Lie to Me, a popular 2009 TV series. The premise was based on the expertise of a scientist, whose exceptional talent to solve crimes through facial deception detection, caught the “liar” every week.   Easy Hollywood math – clever, gifted sleuth outwits crafty criminals and justice is served – in less than sixty minutes.
In the three years that have passed, trust levels in all institutions continue their steady decline, massive government secrecy is in the headlines and privacy is rapidly disappearing.  Deciphering lies is clearly getting more complex.
Although we like to think of ourselves as rational beings, living and working in reputable societies, today’s news and polling data reflect deeply divided and disaffected cultures where honesty’s definition is increasingly ambiguous.
Seems like – lots of people and most institutions we hold dear are lying.  We care about lying, except when we don’t.  Take for example, the government.  For the past seven years, trust in government has been in steady decline. A January 2013 Pew Research survey found that only about a quarter (26%) of Americans said they can trust the government always or most of the time, while nearly three-quarters (73%) say they can trust government only some of the time, or as some respondents volunteered – never.
While there are many factors that impact these numbers, the gist of the survey is clear – trust in government, overall, is in steep decline.  Few could disagree that such deep mistrust has a profound effect on governance and citizen engagement.  If institutions and their leaders cannot be trusted, how can a system function even to deliver the most minimal services?
Yet, we have recently witnessed a curious anomaly in government trust in recent polls measuring public support of surveillance of online communications and telephone metadata collection.  When stories about the NSA’s surveillance programs broke in mid-June, the polls showed a higher percentage of Americans were tolerant of the intrusion.  A Quinnipiac poll released on July 10th, showed the numbers shifting. According to the report, “45% of Americans feel as though the newly detailed programs go too far.”
Reporting on the poll, Atlantic Magazine author, Philip Bump points out that other questions, asked in the survey illustrate the contradictory mindsets of the respondents, “Do you think the collection of phone metadata is too much intrusion into privacy?  They asked, with a majority, 53% saying yes. But respondents also were asked if it was necessary to keep them safe and 54% said it was. And when the program was described, 51% said they supported  it. So a plurality worries about the intrusiveness of surveillance in general, and a majority think the collection – and analysis – of phone metadata is too intrusive. But they support it and think it’s necessary. Armchair psychologists – please weigh in.”

Are We Living in an Era of Lies?

The Post-Truth Era author Ralph Keyes writes, “At one time, we had truth and lies. Now we have truth, lies and statements that may not be true but we consider them too benign to call false. Euphemisms abound. We’re economical with the truth, we “sweeten” it. The term deceive gives way to spin. At worst, we admit to “misspeaking,” or exercising “poor judgment.”  A liar is ethically challenged. We don’t accuse others of lying; we say they’re in denial. In the post-truth era, borders blur between truth and lies and honesty and dishonesty, fiction and nonfiction.”
Does Keyes have it right? Are the lines so blurred that we can’t tell, or even worse, care whether we are lying or being lied to?  Do we know when we are lying or has our personal or collective narrative become so compelling (we want to get ahead or everyone does it or we want to be safe) that we lie to ourselves for justification?
While I don’t want to accuse any of my readers of being liars, the statistics unfortunately show that lying is becoming commonplace.  Call them lies, white lies, ethical lies, secrets, omissions, cheating, exaggerations or fibs – lack of sincerity can seem pandemic in today’s culture.
According to Psychologist Robert Feldman (author of The Liar in Your Life: How Lies Work & What They Tell Us about Ourselves) people lie without even thinking about it (which means it’s outside of their conscious awareness).  Feldman’s research shows that we lie on average 3 times in a 10 minute period when we are becoming acquainted with someone. Dr. Feldman also says we lie less to those we are close to but when we do, the lies are bigger.
Pride. Envy. Jealousy. Hubris. Shame. Embarrassment. Empathy. Guilt. Worry. And FEAR – especially fear – are some of the emotional drivers of our dishonesty.  Human needs are at the core. Most experts would agree – we lie for two major reasons – to get what we want and to preserve our self-esteem.  People are, after all, social beings acting primarily in their own self-interest. Group behavior and norms play a huge role in enabling a culture where dishonesty flourishes.

In his book, The (Honest) Truth about Dishonesty, Behavioral economist Dan Ariely, who has run experiments at Duke University with some 30,000 people found that very few people lie a lot, but almost everyone lies a little.
Ariely challenges the simple theory held by most people that a few rotten apples spoil the bunch. Rather, he asserts, it’s the small-scale mass cheating, not the high-profiles cases, that are most corrosive to society. Ariely points out that most people act from a duality of motives, rationalizing just enough to maintain their self-images as good people.
“Everyday” dishonesty (as distinguished from pathological deceit) whatever the motive, always involves some level of rationalization to self-justify psychological dissonance.  In 1957 psychologist Leon Festinger proposed the theory of cognitive dissonance, where conflicting attitudes, beliefs and behaviors lead to an internal feeling of discomfort which must be somehow harmonized to minimize psychological pain.  Cognitive rationalization is commonly used to self-regulate uncomfortable inconsistencies by justifying thoughts and actions that disturb our internal narrative to keep our self-image stable.
In his Scientific American article, The Mind’s Compartments Create Conflicting Beliefs, author Michael Shermer writes, “The brain evolved as a modular, multitasking problem-solving organ – a Swiss Army knife of practical tools in the old metaphor an app-loaded iPhone in the new.”  In the parts theory model of the mind, beliefs, behaviors and emotions are constantly rebalanced by an internal narrative that mitigates based on levels of discomfort in response to internal and external stimuli.
According to Shermer, “There is not a unified “self” that generates internally consistent and seamlessly coherent beliefs devoid of conflict. Instead we are a collection of distinct but interacting modules often at odds with one another.”   Compartmentalization acts as a brilliant survival mechanism and recent research shows that lying can serve personal and social good in certain circumstances. However, rationalization has its limits, and even a rich internal cognitive narrative cannot override the emotional conflict of self-deception.
In particular, Shermer points to the “moral emotions,” as having significant weight in eroding our ability to successfully rationalize untenable positions.  Accordingly we must “bend and distort data and evidence through a process called motivated reasoning.”  When we engage in motivated reasoning, we tend to seek and find information and experiences that support our model of the world – regardless of the accuracy of the information.
Despite the data and constant “evidence” of declining trust and growing dishonesty in nearly every corner of private and public life, most people I know and work with continue to express that trust and honesty are the  most important values they desire in relationships.  They may not expect it as much in the workplace (which is sad and a major factor in the latest surveys on employee disengagement) but they still want it. Cynicism does not inoculate us from our need for authentic connection with other human beings.
Thinking about lies and dishonesty so deeply again reminds me of how precious truth is.  We can dance around it cognitively and verbally but the bottom line is that the heart knows.  Our emotions do not betray us – if we are listening.
There’s purity in truth I want to preserve.  In a world awash with dishonesty I want to work a little harder to create these tiny zones of truth wherever possible.  More than ever, honesty feels like a sacred act.

Thanks for reading and taking the time to comment, subscribe, share, like and tweet this article. It’s appreciated.
Louise Altman, Partner, Intentional Communication Consultants
Join us here if you’d like to receive our occasional general mailings!
Related articles: Is Self-Deception Keeping You in the Box?  Trust and First Impressions Fear’s Everywhere~How Are You Managing It?