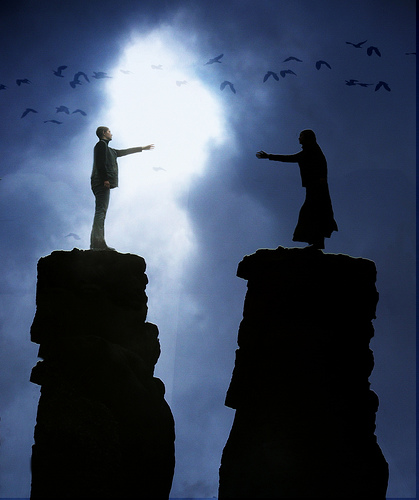 “The existentialists have constantly reminded us that what is worth understanding and knowing is our existence, the human condition, and that engagement and involvement are superior to a detached stance. Our mirror neurons show that we are not alone, but are biologically wired and evolutionary designed to be deeply interconnected with one another.”

Marco Iacaboni, Mirroring People: The Science of Empathy and How We Connect to Others

Some years ago I wrote this in response to a widely read  New York Times article by the popular author. David Brooks, entitled The Limits of Empathy. Since that time, criticism and “concerns” from mainstream journalism continue to question the value of empathy as a good for personal and collective human behavior.

The article dismissed empathy as “a delicious moral emotion” that does not lead us to moral action.  Judging by the large and overwhelmingly negative comments on the site, his readers mostly disagreed with Brook’s premise.
While I’ve  written about empathy before, not enough can be said about its potential to transform our  personal  and social experiences.  The Brooks article serves as a good vehicle to shed some more light on the subject.  While Brooks raised some questions that are, from the perspective of science, not yet answered; his examples border so much on the conclusive, that it is hard not to assume that his agenda may be more cynical than exploratory.

Brooks begins his article by stating, “We are living in the middle of an empathy craze.”
Within the context of his piece I think Brooks is implying that this isn’t a good thing – or at least, that it’s a fad.  It is true that in the past few years there has been a huge increase in research and interest in the concept of empathy. I think this is a very good thing.  Though the term empathy was first used by psychologist Theodor Lipps in his work in 1932, it was philosopher Robert Visher who first coined the term in 1873.  My point, Mr. Brooks is that empathy – described as human feeling – hasn’t been around very long. And it has only been within the past ten years that scientific research has accelerated our understanding of the role of empathy as a human dynamic.  If Mr. Brook’s concern is that some may speculate that empathy offers us a potential panacea for our social ills, I think it’s safe to say – we are only at the beginning of our understanding.   Empathy and altruism are evolutionary and we’re discovering that many species (chickens are the latest) share emotions and respond to each other’s distress.

Brooks: “People who are empathetic are more sensitive to the perspectives and sufferings of others. They are more likely to make compassionate moral judgments. The problem comes when we try to turn feeling into action. Empathy makes you more aware of other people’s suffering, but it’s not clear it actually motivates you to take moral action or prevents you from taking immoral action.”
Reasonable concern, Mr. Brooks. But when I read between your lines I think you are blaming “the morally delicious” empathy for a lack of moral action.  Like empathy, morality (is complex) and originates in the biology of the brain. In her new book, Braintrust, What Neuroscience Tells Us About Morality, neurophilosoper, Patricia Churchland points out that the neurobiological act of maternal bonding, modified by evolutionary pressures and cultural values are the shapers of moral behavior.
According to Churchland, we’re as wired for morality as we are for empathy but the defining influences have to do with our cultural conditioning as to the direction our inherent dispositions will take.

Brooks: “In the early days of the Holocaust, Nazi prison guards sometimes wept as they mowed down Jewish women and children, but they still did it. Subjects in the famous Milgram experiments felt anguish as they appeared to administer electric shocks to other research subjects, but they pressed on because some guy in a lab coat told them to.”
Extreme arguments that focus on the heinous acts of the Holocaust and other atrocities are often compelling but not necessarily useful in understanding the complexity of human behavior.
Here I think using some examples from the article’s reader comments will help get to the heart of Brook’s analogy:
“Leave it to David Brooks to look at soldiers whose obedience to authority overrode their empathy for their victims, and blame the empathy, instead of the submitting to authority.”
“If Nazis cried when exterminating Jews, it’s because empathy conflicted with duty and lost. This doesn’t mean that empathy is insufficient, it means that the code of authority is evil.”
“Empathy is no fragile flower, in other words; it’s a powerfully *other* way of seeing and feeling.  If that Milgram fellow in the white coat kept on barking out his little orders to continue with the experiment, the truly empathic guy would probably just say, “Hey, buddy, Dr. Milgram, Sir? Maybe you need to take off that white coat of yours for a bit and take a little breather, no?”  The empathic guy, in other words, isn’t *in a mood.* He’s seeing it all very, very differently.”

The late psychologist Heinz Kohut captured the spirit and purpose of empathy when he said, “Empathy and introspection should be looked at as an informer of appropriate action.”

Brooks cites the work of City University of New York philosopher Jesse Prinz in arguing that empathy can often lead people astray. “It influences people to care more about cute victims than ugly victims. It leads to nepotism. It subverts justice; juries give lighter sentences to defendants that show sadness. It leads us to react to shocking incidents, like a hurricane, but not longstanding conditions, like global hunger or preventable diseases.”

This example demonstrates a common inability to define empathy and understand its scope.  Typically misunderstood as feeling what others are feeling (which has a whole host of other implications),  Dr. Nicolas Danziger has described “true empathy” as the “ability to imagine how others are feeling, especially people who are not the same as you.”
In Brook’s extreme conclusion that empathy blinds us to sound judgment we can also detect the shadow of something counselor Dr. Mark Stebnicki called “empathy fatigue.”

While we all recognize that the immediacy of living in a wired, connected global world is impacting our natural empathetic tendencies in unimaginable ways, our own thoughts and beliefs also play a major role.  Various studies, most notably, the Batson Princeton Theological Seminary study, found that empathetic intentions were often consumed by inattention  and self-focus – nothing venal, simply distractions that kept people from taking action.

Internal shut-off switches such as thoughts, judgments and beliefs can tamp down our inclinations towards understanding and helping others.  There is plenty of evidence to suggest two important factors that influence these tendencies: we are inclined to be more empathic with those that are more like us – and – we can reverse these habits through awareness and conscious cognitive intervention.

David Brooks seems disappointed that a few decades of research and public awareness of a promising social glue – empathy – hasn’t produced enough results.  He claims that empathy is “insufficient.”

But as we uncover the complexity of our emotional world our challenge is to enhance and act upon our capacity for empathy.  As we learn more about our interconnected social brains, it’s our responsibility to take the information and use it for mutual benefit.  Cynicism and skepticism won’t take us very far – but our empathy has no limits.